The SIRT is a useful training tool to augment live fire training exercises. The resetting trigger allows the user to “fire” the gun without having to action the slide and the shot indicating lasers provide immediate feedback for shot accuracy.

SIRT is an acronym for Shot Indicating Resetting Trigger. As the name suggests, the trigger of the SIRT emulates the trigger pull of the Glock after which it is modeled, but after the the pull has been completed, the trigger “resets” as though a round was cycled.

The metal slide helps to give the SIRT comparable weight and balance to the Glock, but it does not move. Although, the dry fire pistol does have a functioning magazine release, and its magazine is molded and weighted to resemble an actual Glock magazine.

Dry fire is an important element to firearms training off the range. But, while it helps train skills such as, drawing from a holster, changing magazines, and trigger control, it can be monotonous and uninteresting. Fortunately, there are some ways to make dry fire training more interesting, like using the SIRT Dry Fire Training Pistol.

A feature of the SIRT that makes it more interesting for dry fire training is its shot indicating laser. During the trigger pull, a red laser will light up to indicate that the trigger is “prepped.” A second green laser emits when the trigger pull is completed. This secondary beam indicates where the shot would have been placed, were it a live fire drill. The laser positioning is adjustable, and the SIRT also features a switch to engage or disengage the red trigger prep indicating laser.

As the SIRT features a rail for mounting light or laser accessories. This allows the user to train with a tool that more closely emulates their own pistol while performing exercises like speed reloads, mock IDPA courses, or even force-on-force training. 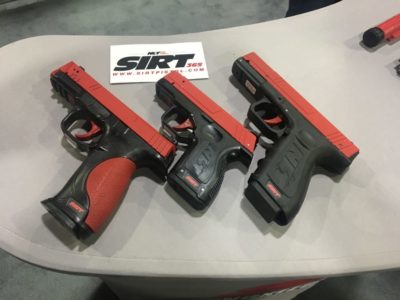 The Next Level Training Shot Indicating Resetting Trigger Training Pistol is an essential training and teaching tool. You cannot understand the full impact of this device on your life until you get one. Don’t wait. The basic model is $239. It doesn’t take much ammo savings to pay for one. There are a number of models for different needs.

There are some great training videos at Next Level Training.

Photo courtesy of Next Level Training

This post first appeared on paragraph4.media and is re-posted with permission.

Mark Miller is a Green Beret who served in Afghanistan and a number of other live fire locations. He's a poet-warrior in the classic sense, a casual hero and a student of science.